Latest
Learn How to Make Financial Forecasting as Easy as Finding Your Favorite Pair of Socks Big 4 Lawsuits: Ex-PwC Partner vs. PwC, Deloitte Partner vs. Deloitte Australia, Watchstone vs. PwC U.K. Friendly Reminder: You Can Take the CPA Exam in Any Jurisdiction, Not Just Your Own Listicle of the Day: No Major Shake-Ups In 2020 INSIDE Public Accounting Top 100 Firms EY Being Blamed by Butthurt Hockey Fans for New York Rangers Getting #1 NHL Draft Pick

Fall is in the air, and that means that if you’re in your mid-twenties, ply your trade in public accounting, and are prone to even the occasional moment of introspective thought, you’re probably considering quitting your job right about now.

Why? Because sometimes, public accounting sucks. And rarely does it suck more than during the summer busy season, when the rest of the adult world is basking in beach days and happy hours and you’re stuck cranking out 70 hour work weeks in advance of the extended due dates for tax returns.

So when October 15th mercifully arrives, you’re well within your rights to contemplate a career change.

And I’m not referring to jumping ship from PwC to D&T or from regional firm to regional firm, because those are temporary fixes to temporary problems. Changing jobs within public accounting is a proven way to get a little more money or a slightly more impressive title, but it does nothing to ameliorate the big-picture issues that probably have you daydreaming of becoming a racecar driver. As a result, this post is intended for those of you who have so irreversibly soured on public accounting that you’re ready to try something completely new.

Should you do it? Hell if I know, as I’ve never worked a day outside of public accounting, and this career choice has worked out just fine for me. But I do know a few things you should be thinking about when you make your decision.

There’s no shortage of motivating factors for leaving public accounting, from the shitty hours to the hyper-competitiveness to the twisted fact that in an industry where value is measured by chargeable hours, intellect and efficiency are not necessarily positive attributes. Justifiable reasons, all.

And if any one of them has you considering starting over, you may want to ask yourself the following question:

Is there a partner at my current firm whose life I would want?

The reality at many CPA firms is that if you stick it out, you’ll make a bunch of money and have a kick-ass view from your office. However, life doesn’t get easier when you reach the top (trust me on that). Partners work a shit-ton of hours. I know plenty who show up at 5AM on every Saturday from January through April. Who survey the office at 9 PM wondering whether it’s “OK” to leave even though presumably, they only answer to a handful of people. Who, in other words, live the exact same professional life they did at 24, only with a lot more stress and responsibility heaped on top.

So just like they say to look to the mother before choosing a wife, take a peek at your bosses to see what the future holds for you. If you don’t like what you see, then an extended stay in public accounting may be akin to rearranging the deck chairs on the Titanic.

If that seems like a colossal waste of time (and it is), then it may be time for a change. So why not…

Strike While the Iron is Hot

In the business world, there is no greater gap between perceived and actual skill level that that of the newly-minted CPA with two-to-five years of public accounting experience. If you fit in that demographic, then you’ve already realized that not a week goes by without a call from a headhunter offering scores of attractive opportunities in industry, despite what would seem to be the rather disconcerting reality that you don’t know shit about anything.

But hey, that’s the problem of whoever hires you. The fact is, after a few years of public accounting and with those three letters following your name, you’ve got value, and more important than money or title, that value can be parlayed into the opportunity to try something new.

If you still find that a seismic shift is too scary a proposition, however, I’d encourage you to…

You’ve got no spouse. No significant other. Hell, it’s been three months since someone swiped right. But that’s OK. Because for once in your sad, isolated existence, you have an advantage over your friends who found true love and settled down by the age of 25, which, by the way, is insane.

You’ve got freedom. Because nobody is counting on you to keep food on the table for a growing family, now is the time for experimentation, and that goes beyond just finding out if you’re gay or not. If you’re ever going to blow up your career and try something radically different, this is the time, because the risk is so small. Actually, if you handle things the right way, there will be no risk, because if there’s one thing I’ve learned about public accounting, it’s that….

You Can Always Go Back

As I mentioned earlier, sometimes, public accounting sucks. But here’s the thing: all jobs suck sometimes.

So if your new gig turns out to be a huge letdown, fear not; your previous firm will be happy to have you back. After all, they trained you, you know their practices and procedures, and since you weren’t fired but rather left of your own volition, they seem to think they can tolerate your presence for extended periods of time. You’re a known commodity.

If I had to put a number on it, I would guess that almost one-third of all Big 4 partners have had a brief dalliance outside of public accounting, only to discover that the grass wasn’t greener for them, return to the industry, and work their way to the top. Leaving for a bit is far from a career killer.

Be warned, however, that while your old firm will take you back, they ain’t gonna make it easy on you. They’re going to want to drive home that you made a huge mistake in thinking there were better options, and secretly revel in the fact that you came crawling back. While to the best of my knowledge, no Big 4 firm has mimicked Mr. Burns’ method for identifying re-hires, it’s probably not far away. 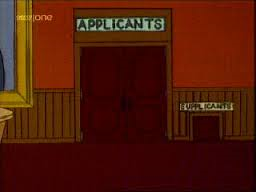 But you’ll get over that. There are far worse things in life than trying something new, finding out it’s not what you hoped it’d be, and returning to your old job armed with a new appreciation for its positive aspects. Of course, this only works if you…

Don’t get me wrong, it’s tempting. Ohhhhh, is it tempting. You’ll never write anything you’re more proud of than letters of resignation where you eviscerate every coworker that ever wronged you, whether real or perceived. And if that’s what you need to do to make peace with your decision to depart, knock yourself out. Those letters, however, should never see the light of day.

Still thinking about making the jump? Alright then, turn the page.

Oh Yeah, About Those Bridges

Witty and acerbic as you fancy yourself, nothing is to be gained from criticizing your former employers on your way out. In the end, the only one who will suffer from your carefully-crafted barbs is you, because once you let them fly, your career change just got a whole lot riskier, because now there’s no going back.

So take the high road, and say all of the right things: “I’ve really enjoyed my time here. It’s not you; it’s me. I want to try something new while I’m young.”

Play it cool, and the worst that can happen is that your new job sucks even worse than your old job, and you end up right back where you started. Don’t play it cool and you’ll end up a meme on Going Concern. So with that in mind, all that’s left to do is…

Funny thing about life…we place so much emphasis on what we perceive to be the “big” decisions — where to go to college, what job to take, who to start at kicker in our fantasy football league — but as you grow older, you realize that none of that shit matters. The decisions that end up plotting the course of our lives are the seemingly small ones; to wit, as I debated whether to go to a Christmas party in 2003, little did I know that once there, I’d meet my wife.

When your bones eventually turn to dust, you’re not going to rue the day you left public accounting to take a run at Broadway as the moment it all started to fall apart. It will just be another in the endless string of experiences – not good or bad experiences, mind you, just experiences — that ultimately played a role in who you would become.

So don’t freak out. If you’re thinking of trying something new, follow my advice. If you don’t like what the future holds at your current job, try something new. Embrace the fact that someday you’ll have a spouse and a mortgage and tuition payments for your kids, and you won’t have the freedom and flexibility to try new stuff. Handle your departure as a professional, and you can always come back.

And, most likely, for higher pay.

Hey guys, do me a quick favor. Clear off all those empty Dunkin cups, doughnut crumbs, crumpled up Post-It Notes, old pens that ran out of ink, and that Xbox controller off your coffee-stained desk calendar, find the block for Thursday, Aug. 27, and write in “Webinar, 11 a.m. ET/8 a.m. PT.” Because who couldn’t […]

[Updated on Aug. 10 with a job opening at Graham & Co. CPAs in Boulder, CO.]  Welcome to Going Concern’s Hiring Tracker, which we hope becomes a resource for accounting professionals who recently lost their jobs during the COVID-19 crisis. We’re asking public accounting firms, companies with openings in their accounting/finance departments, and even nonprofits […]