A recent article by the New York Times is widening the massive canyon between accounting grads and law grads by reminding everyone just how different life is for would-be lawyers. Granted, with something like a 106% unemployment rate for new law grads and 100% utilization of new accounting grads1, it makes sense that a select few law grads might be fortunate enough to spend their study time on the beach in some exotic locale while the poor accounting grads actually have jobs to tend to fresh out of college:

If you are sentenced to a summer in study hell, you might as well relocate it to Negril, Jamaica.

That was the conclusion of Casey Pearlman and her boyfriend, Evan Sypek, who graduated from New York University School of Law last year and decided they could not bear the idea of spending a summer in the city among the miserable.

Instead, they took flight to Negril, a coastal resort town, where they rented a three-bedroom house on the beach for $3,000 for six weeks and converted it to Study Command Central. Starting at 9 a.m., they would hunker over their iPads loaded with study materials and a cup of Jamaica Blue Mountain coffee. Around lunch, they would break for a bike ride into town for fish curry and a $1 Red Stripe. The biggest challenge, such as it was, was finding a spot to study on Seven Mile Beach a sufficient distance from the skin-baring revelers at Hedonism II, the famously racy resort nearby. “Every time we found ourselves in one of those perfect Jamaica moments, we would question why we were trying to become big-city lawyers in the first place,” said Ms. Pearlman, 26.

The entire article has a horrible "First World Problems" tone to it and I can't quite tell if this is some problem exclusive to pampered Millennials with too much of their parents money to blow (after all, they did go to law school) or a legitimate epidemic:

For graduates studying for the bar, any extra stress can be perilous. So Brittany Primavera, a recent graduate of Seton Hall University School of Law, escaped the “angst and tension” of the law library by renting a house in Ocean Grove, on the Jersey Shore, where she spends her afternoons studying in a beach chair, surrounded by children building sand castles. “I’m getting so tan that people will be shocked that I’m getting any work done,” said Ms. Primavera, 25.

Maybe it's just me but I really can't see how being surrounded by people actually having fun could relieve stress when you're stuck straining your eyes to slog through your study materials in the burning sun. Yeah, that sounds awesome. Truly. Here's a great photo of Brittany earning herself what will be the oddest farmer tan ever: 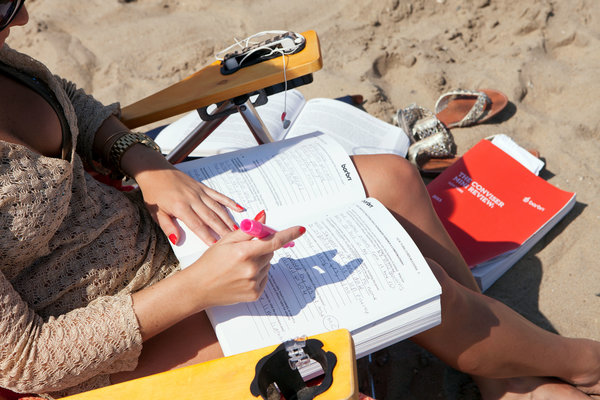 The article goes on to explain that things weren't always so easy for the future lawyers of America. Back in the dark ages of exam prep (like 2006), they actually had to attend classes in their own state and wait by the mailbox for materials. OH THE HUMANITY. How on Earth did anyone ever pass the bar being forced to study at the library?! How archaic!

Of course, the employability of accounting grads isn't the only thing that makes the idea of a study-cation ridiculous for CPA exam candidates, but the long, drawn-out process of actually taking the exam. Sure, you could take a year off and travel Europe with a good WiFi box and your CPA review books but who wants to waste a trip to Europe by holing up in your hostel with flashcards and a bunch of rank teenagers from Holland? But hey, now that the exam has gone international, maybe those of you with a ton of money to burn will head to Brazil to recite mnemonics at the beach.

1 I completely made those numbers up. On purpose. So sue me.

According to the AICPA’s CPA exam score release timeline, candidates who sat for the exam on or before July 23 were due to receive their scores tomorrow, August 7; however, according to a very recent tweet from NASBA, scores are here just a little early. #CPAExam candidates! Waiting for your score(s)? They will be released […]