Latest
Learn How to Make Financial Forecasting as Easy as Finding Your Favorite Pair of Socks Big 4 Lawsuits: Ex-PwC Partner vs. PwC, Deloitte Partner vs. Deloitte Australia, Watchstone vs. PwC U.K. Friendly Reminder: You Can Take the CPA Exam in Any Jurisdiction, Not Just Your Own Listicle of the Day: No Major Shake-Ups In 2020 INSIDE Public Accounting Top 100 Firms EY Being Blamed by Butthurt Hockey Fans for New York Rangers Getting #1 NHL Draft Pick

You know, it was only a matter of time until one of you did this. I should have known when I saw a “how much work from home time are you spending jerking off” question on Reddit that this was the inevitable escalation soon to come (no pun). It goes without saying this post may be NSFW, but because most of you are at home (clearly) and because the title makes it pretty clear this is about actual jerking off and not some thinly-veiled euphemism for the sausage factory of public accounting, I guess you don’t need a warning. The pearl-clutchers might want to sit this one out. You know, because it’s about some guy pulling his pud while on the clock.

u/thecuntlordof69 has used his workpaper skills to track two weeks of wanking it on the job at home. Let’s exercise our professional skepticism when it comes to the fact that he arrived at an amount of just over $69 in tracking his sessions from 4/1/20 to 4/15/20 and proceed with caution. 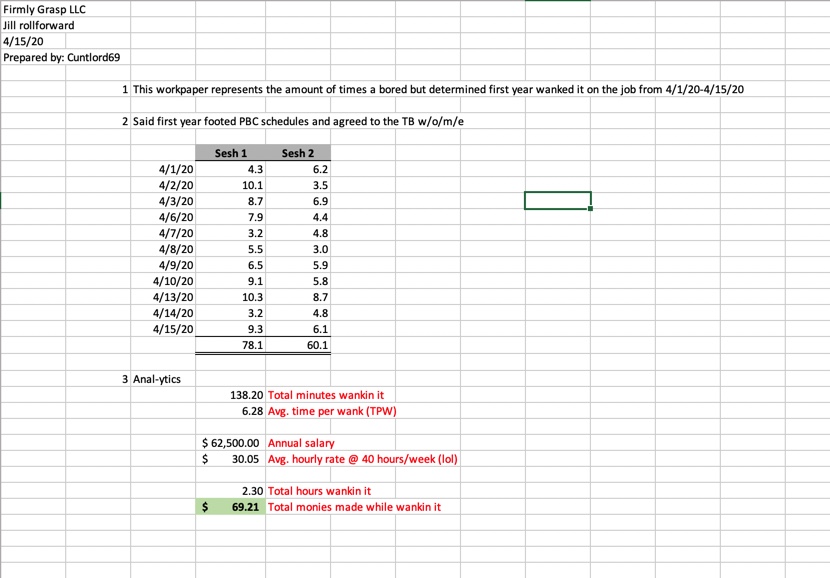 Apparently his post was removed by /r/accounting mods the first time around, so we’ll save it for posterity below.

Like most of us here, I have been working from home since Mid-March. I live in a single apartment – and like most of us here – I am a single male. I haven’t had much work to do from late March to now so I’ve had a lot of time on my hands. Well, that’s not the only thing I’ve had on my hands, but we’ll get to that later.

Having not seen any physical living thing other than my grocery store homies or various delivery drivers, one could imagine I am losing my sanity. On April 1st I had a scintillating idea. Since it would be a long time until the government legalizes outside again, I would keep a record of my jerk off sessions over the next two weeks to see how much money I made during them.

You see, in my dainty little apartment I have a desk. A small desk. But right over there is my nice welcoming sectional sofa – and I am the sofa king. So whenever I have felt the need to get some serotonin, I hop-skiddly-do over there and get to work.

Here is the workpaper I’ve made to record my time. Any seniors want to add comments just shoot me an IM and we’ll circle back and touch tips later.

As you can see, it’s perfect. Sift thru the data if you please, judge me on my times if you must, envy me on my stamina if you want. I never jerked it 3 times during work, I am not an animal. I never jerked it just once, I am not lazy. I viewed this as work, something that had to get done, and I didn’t want to spend too much time doing this. Plus I haven’t had a human touch in months and I’m young so it’s basically come-on-command.

Anyways, here’s where things get interesting. Yesterday after my second shift, I checked my bank account to see if I got my stimulus package yet. And oh my I did. Now I don’t know when the deposit hit my account, but for the sake of time and argument, I’ve deduced that I got my stimulus package right as I stimulated my package. Now you may be wondering, is that earned revenue for myself? Maybe I’ll have to make an adjusting entry to my model and include that $1200 in the total monies I made while wankin it. Who knows.

One burning question remains: Did he bill the client for this?

I would also like the record to reflect that I am so proud of y’all for making such productive use of your isolation time. Keep it up (heh).

Hey guys, do me a quick favor. Clear off all those empty Dunkin cups, doughnut crumbs, crumpled up Post-It Notes, old pens that ran out of ink, and that Xbox controller off your coffee-stained desk calendar, find the block for Thursday, Aug. 27, and write in “Webinar, 11 a.m. ET/8 a.m. PT.” Because who couldn’t […]