Yesterday we began our review of the seven audit quality inspection reports issued recently by the U.K.’s audit cops, the Financial Reporting Council, with Deloitte, which was found to have only four of 17 audits (23.5%) that weren’t up to snuff. Today’s victim is PwC.

Let’s see how this stalwart of auditing did during the 2019-20 inspection cycle:

We reviewed 17 individual audits this year and assessed only 11 (65%) as requiring no more than limited improvements. Of the 12 FTSE 350 audits we reviewed this year, we assessed only eight (67%) as achieving this standard.

So if 11 of 17 audits needed little-to-no improvements, that means six (35.3%) were subpar or worse. And unlike Deloitte, PwC fell WAY short of the target set by the FRC a few years ago, that at least 90% of FTSE 350 audits should be “good or requiring no more than limited improvements.”

The FRC called this dismal display of auditing “unsatisfactory” and “we expect the firm to take specific action to address this.” That’s usually how the FRC talks about KPMG and Grant Thornton audits, not PwC’s. The House of Ellis can’t be pleased.

As you can see in this graph in the FRC’s report, PwC’s audit quality has been slipping the past few years: 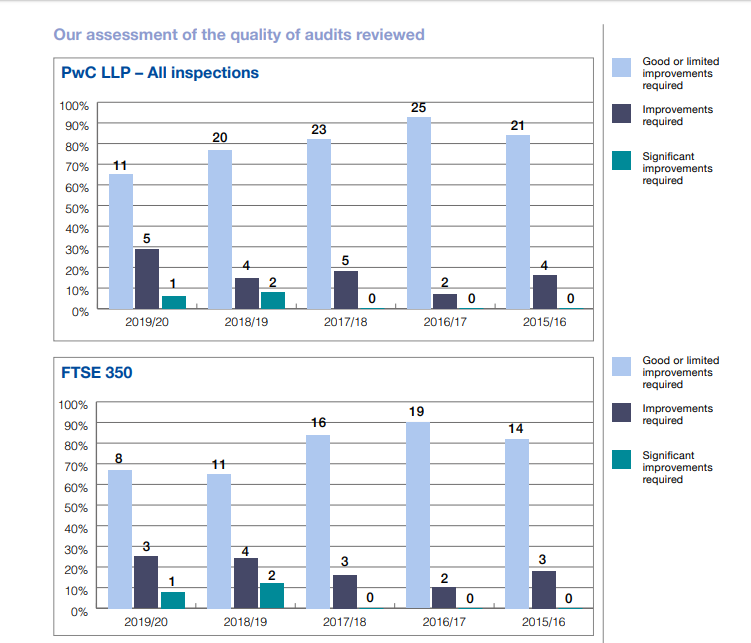 The area that got the biggest ding from the FRC was accounting for long-term contracts (bold emphasis added):

Given the potential impact on the financial statements, we reviewed the audit of long-term contracts on all audits where it was a significant risk. While we have seen improvements in this area compared with last year, we continued to identify instances of insufficient audit team challenge or corroboration, in relation to long-term contracts, in the following cases:

The firm should consider whether assistance could be obtained from the firm’s experts (for example quantity surveyors) in relation to the audit of long-term contracts.

The good news for the Queen’s PwC is, as long as there is a KPMG, PwC will usually never have to worry about having the worst audit quality performance among the Big 4.