Big 4 revenue gloating season kicked off today with PwC being first out of the gate. In a normal year, EY is typically first bragging about its third-place global revenue, then Deloitte, P. Dubs, and KPMG. But 2020 has been anything but normal, and that is reflected in PwC’s results for the most recent financial year.

The House of BoMo announced today that PwC pulled in $43 billion globally for the 12 months ending June 30, a 1.4% increase from 2019’s $42.4 billion. Despite the meager increase, that $43 billion in revenue is the most PwC has ever reported in a single fiscal year. But it could have been sooooo much higher if it wasn’t for that meddling virus:

During the first nine months of FY20 to the end of March, revenues grew by nearly 7% over the same period last year with increases across all lines of business and in every major market. From April to June, revenues were significantly impacted by the lockdown and subsequent slowing economies as countries around the world fought the COVID-19 pandemic. Compared to the same three months in 2019, revenues were down from April to June 2020 by 6%.

So had PwC been able to maintain that 7% growth toward the end of its financial year, the firm’s global revenue would have been roughly $45.4 billion, which still wouldn’t be enough to take over first place from Deloitte.

The Americas region pulled in the most revenue by far with nearly $18.3 billion, a 2.7% increase over last year. The Middle East and Africa region also had a good 2020, increasing its revenue by 6.9%. However, 2020 was a disaster for the Australasia and Pacific region, as this chart from PwC shows: 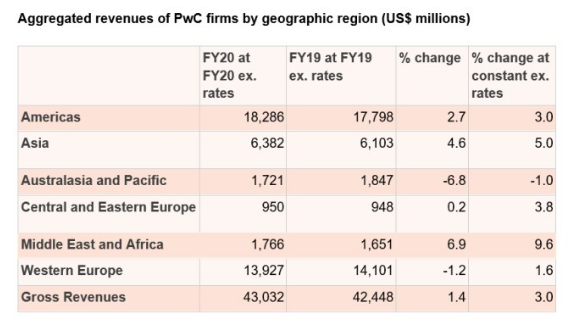 Of PwC’s three core businesses, advisory services had modest revenue growth of 2.2% over last year, while assurance services and tax and legal services each had slight increases in revenue, despite the pandemic: 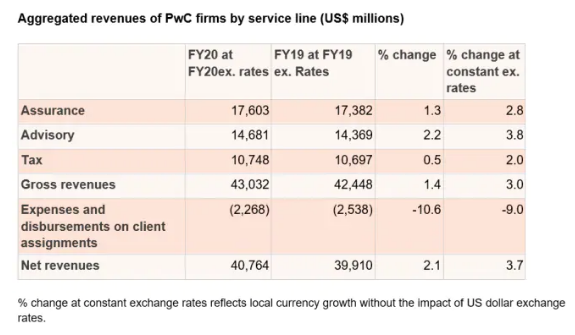 BoMo said in today’s press release that the next 12 months could be brutal for businesses around the world, including PwC:

“While we adapted quickly to many of the new challenges that the COVID-19 pandemic brought, there is no doubt that the next 12 months and beyond are going to be difficult. Our economists are predicting that the global economy will contract by 5.5 % by the end of 2021 and while different countries will recover at different rates it is clear that the economic downturn will impact us and our clients across the world,” said Bob Moritz, Chairman of the PwC Network.

EY and Deloitte typically release their latest revenue results in September, but now that PwC beat them to the punch, we’ll see if that alters their timetables at all. KPMG waits until December to let everyone know that it is still the “4” in “Big 4.”

Back in mid-June, Deloitte Global CEO Punit Renjen was already boasting about Deloitte’s projected FY 2020 revenue of $48 billion, which would be a 3.9% increase over 2019 and cement the Green Dot’s place as the largest Big 4 firm in the world.

PwC Earns Record Revenue of $42.4 Billion In FY 2019, Is Still the First Loser
Deloitte Is Already Bragging About How Great Its Global Revenues Are For FY 2020

The second contestant in the Big 4 global revenue pissing match came out with its FY 2020 financial results today, and EY continued to exert its dominance of third place. The Black and Yellow announced global revenue of $37.2 billion for the fiscal year that ended June 30, a 2.3% increase in U.S. currency terms […]

[Updated on Sept. 10 with additional information.] Here’s the latest from the House of Vorsatz: Andersen employees—from director level on down—have now been reimbursed for all salary lost due to Rona-related pay cuts through Aug. 21, according to a tip we received this week. However, the pay cuts are still in effect for the time […]

An Open Letter to EY Management