Latest
Learn How to Make Financial Forecasting as Easy as Finding Your Favorite Pair of Socks Wirecard Drama of the Day: Where, Oh Where, Is Jan Marsalek? Big 4 Lawsuits: Ex-PwC Partner vs. PwC, Deloitte Partner vs. Deloitte Australia, Watchstone vs. PwC U.K. Friendly Reminder: You Can Take the CPA Exam in Any Jurisdiction, Not Just Your Own Listicle of the Day: No Major Shake-Ups In 2020 INSIDE Public Accounting Top 100 Firms

Just when you thought, "Boy, it's been awhile since I've seen a terrible PCAOB inspection report," here comes the PCAOB with a terrible inspection report. It's like Christmas! Well, for those of us who find this entertaining, anyway. For Grant Thornton, not so much.

Out of reviews of portions of 36 audits, PCAOB inspectors found deficiencies in 20 of them, giving Grant Thornton a failure rate of 55.6%. This is down from last year's dynamic failure rate of 65%, so that's an obvious improvement!

The volume of findings in this report is concerning and of great importance to our dedicated professionals. Nineteen of the 22 engagements included in Part 1 of this report (86%) include finding related to the audit of internal control over financial reporting (ICFR). These audits of 2011 financial statements were completed during or before the spring of 2012. In the summer of 2012 we revised our ICFR methodology and training in response to the PCAOB's increased concern about the quality of ICFR audits across the entire auditing profession.

So we have to ask, how did they do on ICFR this time around? Spoiler alert: pretty bad. 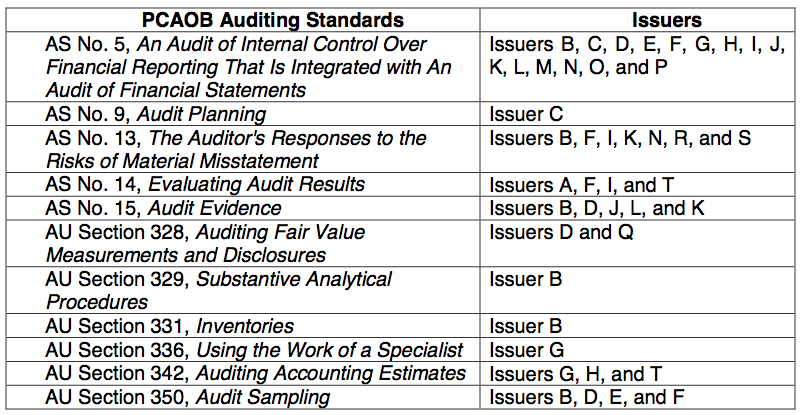 Well, bad but not as bad as last year. Grant Thornton managed to screw up Auditing Standard No. 5 on just 75% of audits inspected this time, versus 86% last year. More improvement! What do you have to say for yourself, GT?

The Firm notes that approximately 75% of the engagements included in Part I of the Report relate to the audit of internal control over financial reporting. Since the completion of these audits, which were principally related to calendar year-end 2012 engagements, the Firm has implemented a number of significant actions related to auditing internal control as well as other areas and contmue to invest resources focused on improving audit quality.

Sooooo… the same excuse as last year, then?

I suppose we have to give them a pass, congratulate them for being less bad than last year, and anxiously await next year's report, which should reflect the firm's "significant actions related to auditing internal control." Yeah, that's it.

If you try to do something to outsmart PCAOB inspectors, more often than not you’ll end up looking like the big dummy. Case in point, former PwC senior manager Ryan Collins, who was barred by the U.S. audit cops on July 21 for altering workpapers. Collins, who worked at P. Dubs from September 2010 until […]

Wirecard Drama of the Day: Where, Oh Where, Is Jan Marsalek?