Every year, my mailbox gets cluttered up with huge proxy statement packets filled with a bunch of crap I won't read. And every year, I vote against the Big 4 accounting firm recommended by the Board. Why? Because it's the only way to stick it to the man now that I've sold out, obviously.

In all seriousness, I find it a bit insulting that other Board proposals get page upon page of explanation and elaboration while the ratification of the company's independent audit firm gets barely a couple paragraphs. On top of that, having used a firm for "many years" is a really crappy reason to keep paying them tens of millions in audit fees. Not that I'm pro auditor rotation either, I just find it a bit silly to ask at all when the proxy statement clearly says if shareholders don't ratify, the company is still going with the firm the Audit Committee picked anyway. They'll consider hiring someone else for the next fiscal year but by then maybe shareholders will have forgotten all about it. 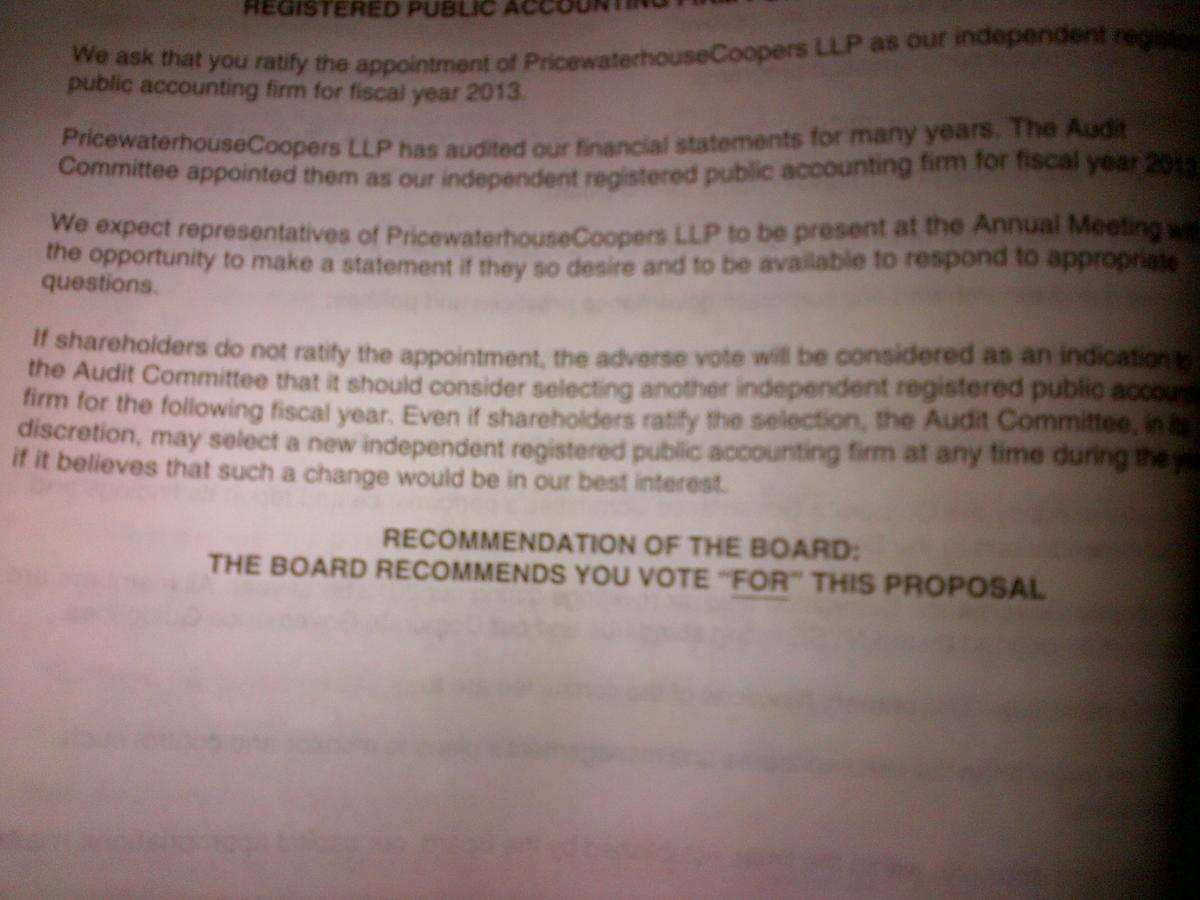 Assuming most shareholders don't read accounting websites or have PCAOB alerts set up, wouldn't it be nice if the Board elaborated a bit on why PwC should be the company's auditor for FY 2013? Or what if they included the 2011 Sucky Audit Rankings Colin posted here earlier?

Well gee, isn't that useful information for shareholders to have when deciding who we want to give $22 million to? Unless – bear with me here, I'm strapping on my tin foil hat – audits really have very little to do with quality at all and none of that matters.

What if instead of playing grab ass with audit firms and being all coy in their inspection reports, the PCAOB helped companies identify their audit firm's deficiencies to shareholders? How am I supposed to know this company wasn't included in PwC's big fat 41% problem rate? And wouldn't I want to know that if we're deciding to keep them on? In NO other job on the planet would someone with a 41% rate of screwing up be A) hired on for another year and B) paid the kind of money audit firms are to do it.

How can the Audit Committee best consider whether "the audit firm is best positioned to provide the most effective and efficient service" when it doesn't even know if ours was one of PwC's crappy audits as identified by the PCAOB?

Now, I've argued before that as an investor, I'd rather this information not be made public simply because I have money sunk into this company and if there are doubts about the reliability of the financial statements, my investment gets hammered for it. But in lieu of true audit reform that makes it less about fees, dodging the PCAOB and checking boxes and more about true audit quality, maybe transparency is the next best thing.

Put another way: let's say you're looking for a nanny for your kids. You'd do a background check on any potentials, right? Would you rather hire the nanny who "accidentally" killed 3 kids, set a few houses on fire, crashed the family car and slept with four different dads or the one who has only had a few boo-boos and maybe a small stove fire in her 20 year career? I know which I'd choose.

I guess I'll just have to hope my company doesn't show up in a Jonathan Weil exposé any time soon.

So, some audit clients have allegedly told KPMG auditors not to come to their offices because of coronavirus concerns, according to a post on Fishbowl. We don’t know if these KPMG audit clients legitimately have COVID-19 concerns or, as one Fishbowl poster says, they just want the auditors off their backs for a bit. Anyway, […]