On Friday we discussed a Florida CPA's bad auditing. Later that same day, the SEC issued a press release that told us about more bad auditing and I think you'll appreciate just how bad it is, so I'll share this one, too.

This time around, we have a scam run by a Canadian lawyer and stock promoter named John Briner who was already suspended from practicing or appearing before the Commission for a pump-and-dump scheme. He created 20 shell companies that he controlled through "figuredhead executives," issued mineral rights to them via another entity he controlled and then filed S-1s for them to go public. Given his track record, you wouldn't think that a guy like Briner would be able to find an audit firm to go along with this, but interestingly enough, he found not one, but two!

The first of the firms is De Joya Griffith and its partners Arthur De Joya, Jason Griffith, Philip Zhang, and Chris Whetman. Incredibly, prior to accepting the nine engagements in late 2011, they did not find anything negative about Briner and his associate, Diane Dalmy, mainly because they didn't look very hard:

De Joya’s client acceptance policies and procedures in effect at the time it accepted the Issuers as clients required very little. De Joya’s policy instructed its staff to “confirm individuals” and, if there was something to report, to “summarize findings, site [sic] sources, and email Partner.” In practice, such check consisted of a simple Internet search.

Zhang failed to sufficiently question or otherwise investigate the Issuers’ management, which would have revealed Briner’s undisclosed role as a control person. Nor did he conduct a background check of Briner or Dalmy, which at minimum would have turned up, among other things, the Commission’s complaint alleging fraud and suspension order against Briner, and that Briner had been on the OTC Market’s Prohibited Attorney List since March 15, 2006, and that Dalmy had also been on the list since September 25, 2009.

This is made worse by the fact that a staff member called attention to it later:

On or about November 5, 2012, a De Joya staff member became concerned that Briner might be engaging in fraud in connection with the De Joya Issuers. Her concern stemmed from conversations she had with certain Issuers’ officers in which nearly all her questions about the Issuers were deferred to Briner.  These conversations caused her to conduct an internet search on Briner.  She found, among other things, the Commission’s complaint against him.  Additional searches yielded news articles describing Briner and Dalmy as repeat securities fraud offenders.

This staff member sent emails to Zhang outlining her concerns and what she found, but then things got even more awkward:

Third, on November 7, 2012, the De Joya staff member sent yet another email to Zhang and the other De Joya partner attaching an article about a De Joya client, MoneyMinding International Corp., and its counsel, Dalmy, who was described as having “a reputation for helping scoundrel promoters take dubious companies public on the U.S. over-the-counter markets.”  The article also specifically mentions De Joya as having “similarly helped many dubious companies go public on the bulletin board.”

I don't know about you, but if I found an article with the name of the firm I was currently working for adjacent to words like "helped many dubious companies go public," it would make me think twice about going to work the next day. But, whatever, in this case, "it was collectively decided that De Joya could continue with the engagements because Briner was not appearing before the Commission in violation of his suspension." That's just amazing.

Before we move on to auditor #2, I'll just highlight a little more brazenly bad auditing that the Commission found:

During the audits and engagement quality reviews, Zhang and Griffith failed to detect basic mistakes in the Issuers’ financial statements and inconsistencies between the financial
statements and information contained in other parts of the registration statements as reflected in the chart under Appendix A.

How basic, you ask? This basic: 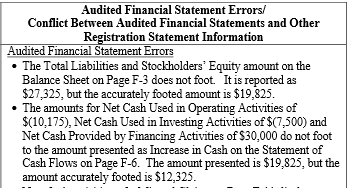 Yep! The numbers literally didn't add up. In total, there are eight bullets outlining mistakes that most audit partners would berate a manager and/or senior staff auditor for missing. But not at De Joya and Griffith!

Which brings us to awful audit firm #2: M&K CPAs, PLLC and their partners Matt Manis, Jon Ridenour, and Ben Ortego. Now what's most interesting about the SEC Orders for these firms is that they have a lot of the same complaints. Six of them1 appear in both, which is kinda weird because it's almost as though Briner was telling the firms how he wanted the entities to be audited and then anything else they wanted to screw up was left totally up to them. Nothing in the orders that I can see indicates the two firms were related, but in both cases, he was the only contact the firms had. It's almost too weird to contemplate.

One of the things missing from M&K's order is the part where a staff member found an overwhelming amount of negative news about Brine, Dalmy or the audit firms they use. However, M&K is mentioned in the same Vancouver Sun article referenced above and it states that the M&K "helped many sham companies go public on the bulletin board."

Where M&K does beats De Joya in terms of ridiculousness is the section entitled, "Manis Did Not Investigate Failures to Account for Audit Fees":

Manis did not question the Issuers’ failures to account for audit fees paid during the audit period. Specifically, M&K requested retainers from Stone Boat and Goldstream, which were paid via wire transfers from Briner’s Master Trust Account during the audit period for these Issuers.  But the retainers M&K received from these Issuers were not reflected in the corresponding schedules that Briner prepared from his Master Trust Account and provided to M&K.

2 Yep! A lot of bad footing in this one, too. Including:

In fact, Appendix A for M&K runs for two pages, while De Joya's is only one. Impressive!

So, some audit clients have allegedly told KPMG auditors not to come to their offices because of coronavirus concerns, according to a post on Fishbowl. We don’t know if these KPMG audit clients legitimately have COVID-19 concerns or, as one Fishbowl poster says, they just want the auditors off their backs for a bit. Anyway, […]