RSM US isn’t making it rain much these days for those receiving a promotion.

Compensation discussions are underway at RSM US, and if you remember, only those getting a promotion at the House of Adams are receiving raises—which were capped at 5% this year as the firm muddles its way through the COVID-19 crisis.

Looking at a compensation thread on Reddit, reactions from newly promoted RSMers ranged from appreciation for getting some bump in pay, to “it is what it is,” to “very discouraging.”

The other day we got an email from an RSM US employee who not only shared with us what their recent compensation discussion experience was like but also a spreadsheet that hypothetically compares (not adjusted for inflation) “the next 10 years of my possible base salary earnings if I stay at RSM and they don’t step-up my base salary in the future.”

RSM is starting their compensation discussions and our office partner called me today to discuss my promotion and raise. Effective August 1st, I’m being promoted to Assurance Supervisor and I’ve been approved for a 5% promotion raise, with 0% performance raise, and a $2,500 bonus (which is about 10% less than last year’s bonus). At this point, anybody who is not getting a promotion is not getting any raise at all. I asked the partner if there was any information on what might happen later in the year or next year, specifically whether he thought it would be likely that at some point raises would return to “normal” or whether there might be an adjustment next year to at least bring our base salaries back up to trajectory, and he said that all of that was uncertain at this point, but he thinks the percentages would be “normal” once business is back to “normal”. I pointed out to him that even if next year’s percentages are normal, if the base that they’re using hasn’t caught up (I’m not even talking about back pay, just the base salary calculation itself), then effectively everyone will be behind forever, because, you know, compound interest or whatever. He said that was an interesting thought that he hadn’t considered and he’d bring it up with firm leadership and get back to me when he had more information… (so probably never).

To me, it seems like this may have permanently (or at least for quite a while) deflated the future value of every promotion in public accounting. What I mean is, if/when I get promoted to manager (which my career advisor said could happen next year based on my performance reviews, which have always been very positive), if there’s no adjustment to my base salary apart from normal promotion + performance percentage increases, then I will ultimately be paid less (even without considering inflation) than those who were promoted to manager last year, and they will ultimately be paid less by their next promotion compared to those above them. This loss of future earnings will have a cumulative effect for pretty much everybody, but it seems like it will hurt those towards the bottom the most because of the number of future promotions they have available and the number of compounding years they could serve in public accounting.

At present, I am very grateful to still be employed, and I am grateful to be receiving a 5% raise, and I understand that I am very fortunate and there are others not at all in the same position as me right now. In the short-term, it seems like RSM’s treatment of salaries is “better” for employees compared to some other firms (take CLA for example, whose employees are taking pay cuts for now). However, I wonder if over the long-term it might’ve been better had we taken pay cuts like CLA, since I believe CLA has promised that salaries will be returned to “market” in the future. Theoretically, if CLA’s employees take a 10% pay cut for even up to a year but then they bump right back up to where they should be and their raises go back to normal, it will be better for them in the long-run than for RSM employees because CLA employees won’t experience that loss of compounding percentage growth of their base pay every year.

Just for fun, I used my own salary figures to calculate the attached spreadsheet showing what could happen if I stayed in public accounting for another 10 years. I think I was fairly conservative with the performance raises given the situation and uncertainty. Obviously, there are several assumptions built into this model and this only shows my own actual and hypothetical numbers, and we don’t know what the market will do in the future or really how long any of us are going to stay in public accounting, but it’s a “fun” thought experiment and really got me thinking about how COVID-19 could financially slow down a lot of folks in their mid-20s to early-30s for many years to come (and not just in public accounting, I’m sure this has wide-reaching economic implications for everyone who isn’t getting a raise this year, like my husband).

Anyway, please enjoy this waste of my billable hours! 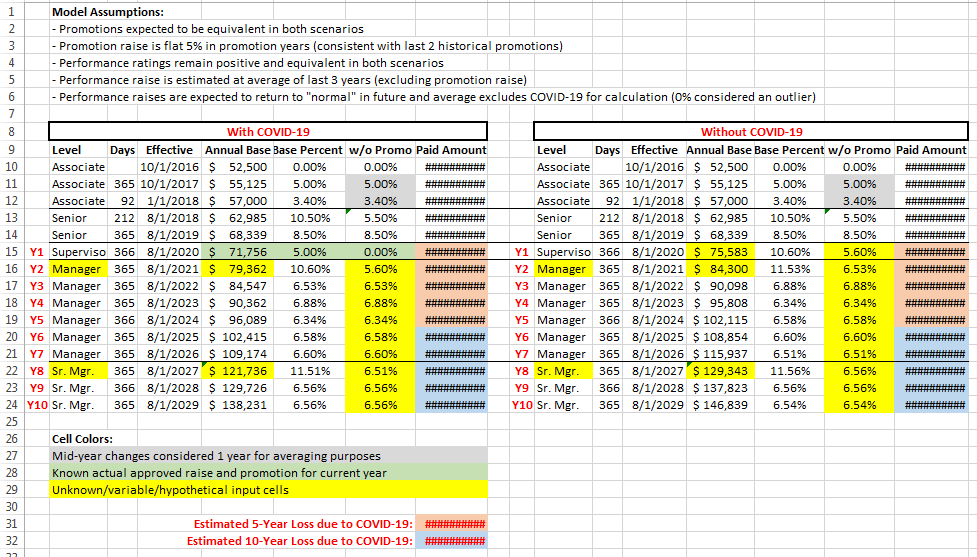 Thank YOU, newly promoted RSM employee, for wasting your billable hours on us.

Comp Watch ’20: Raises and Bonuses Are Looking a Bit Paltry at RSM US