Latest
This ‘Almost-Rockstar’-Developed 10-key Is the Best Thing to Happen to Accounting Since Microsoft Excel Number of the Day: $9.14 Billion Learn How to Make Financial Forecasting as Easy as Finding Your Favorite Pair of Socks Wirecard Drama of the Day: Where, Oh Where, Is Jan Marsalek? Big 4 Lawsuits: Ex-PwC Partner vs. PwC, Deloitte Partner vs. Deloitte Australia, Watchstone vs. PwC U.K.

Remember that article we posted last week about layoffs? You know, the one about that recent Fishbowl survey that revealed 41% of accountants believe job cuts will happen at their firm because of the COVID-19 pandemic? Unfortunately that became a reality on March 26 for more than 50 people who worked at Friedman.

While I was perusing Fishbowl on Friday afternoon, I saw this: 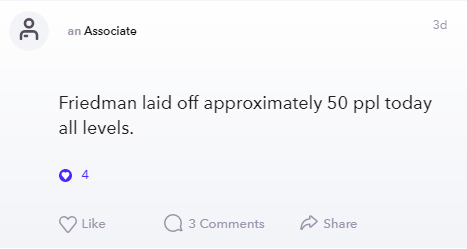 I talked to a source over the weekend who confirmed the layoffs at Friedman and gave me a little more information:

And this afternoon I had a conversation with one of the 52 people who were laid off. This person said they felt horrible for the people who worked at Friedman for seven, 10, or 13-plus years who lost their jobs.

The person said the layoffs were done “in a piss-poor fashion” and that nobody saw it coming, even with the economy floundering because of the pandemic.

“I was recently talking to a partner I know and asked, ‘With everything getting as bad as it is, do we have to worry about our jobs?’ and he wrote back, ‘Absolutely not.’ On Thursday morning at about 9:30, HR had a meeting with the partners saying the firm was letting go of some people and that names would follow,” the ex-Friedman employee said.

The person knew something was up when they were locked out of their computer on Thursday morning. So they called IT.

“They immediately slammed the phone down. I guess they knew I was on the fired list,” the person said.

The next call the person made was to the partner they worked for. “I asked, ‘You know what’s going on?’ and he said, ‘I heard there’s some layoffs today.’”

Less than 30 minutes later, the person was out of a job.

“They could have waited this out two more weeks,” the ex-Friedman employee said. “Had they said, you might get promoted but for financial reasons you’re not getting bonuses and your salary might get a 10% cut, I think every one of the employees would have agreed to this. They jumped the gun way too fast. There were no discussions at all. They were just cutting.”

We don’t know which Friedman offices were impacted, although all staff are working from home for the time being.

Friedman is the first top 50 accounting firm that we know of that decided to part ways with some staff as a result of the pandemic. Unfortunately, they probably won’t be the last.

“Necessity is the mother of invention.” Although the internet has no doubt attributed that quote to everyone from Abraham Lincoln to Marilyn Monroe over the years, it was actually Greek philosopher Plato who spat out the phrase we still use today. What it means in simple terms is that human beings are amazingly adept at […]