[Updated on July 10 with additional information.]

Unfortunately we are hearing more news of Canadian accounting professionals losing their jobs. Although we haven’t been able to confirm yet if there have been firm-wide job cuts at BDO Canada, we were told by a source at BDO in Vancouver on July 9 that several people at that office have been shown the door in the past two weeks.

So back in early April, BDO Canada CEO Pat Kramer sent a message to staff outlining ways the firm has reduced costs during the COVID-19 crisis, including:

But Kramer pleaded to BDOers that “we need to do more and we need your help to make necessary business adjustments in the short-term so we are strongly positioned as a team when the economy begins to recover.”

So he voluntold BDOers to strongly consider (i.e., do this or risk losing your job) two options: reduce the hours that you work (but your workload won’t be reduced, obviously) or take a sabbatical and become a tattoo artist or something. 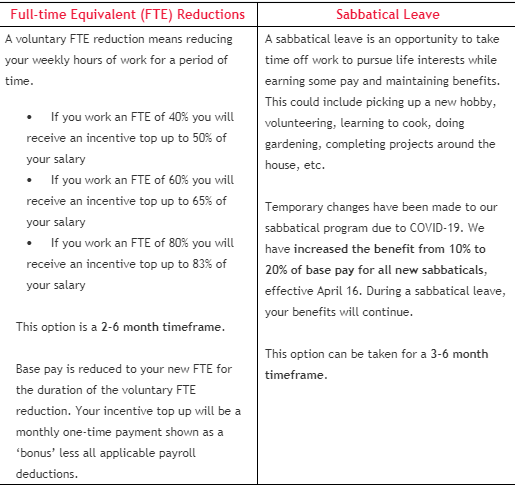 Our BDO source told us:

The Vancouver office started encouraging/forcing people to go on FTE reduced hours from 0.4 to 0.8. Throughout the process they maintained that it was “voluntary” but the reminder started from once a week, quickly to once a day and to 3 times a day. Random partners that you don’t work with will call you and ask you to consider reducing your pay. In the end, everyone got the hint and 89% of people in the Vancouver office chose to reduce their hours, for fear of being laid off.

In an email on May 4 to Vancouver staff, OMP Michael Madsen gushed about how great it was to have 89% of BDOers who volunteered to take reduced work hours.

The email, which was seen by Going Concern, said:

Thank you to all of you who submitted applications for our work-reduction programs. As mentioned many times previously, this program, along with other strategies is critical to our business, which, like many others has been significantly impacted by the economic downturn resulting from the pandemic.

The understanding and cooperation of GVA [Greater Vancouver Area] personnel has been nothing short of outstanding. In the final tally we have over 89% of our people (270 eligible individuals) who have submitted applications to participate at some point in 2020.

Then BDO employees learned that 77% of the firm’s entire Canadian workforce took the voluntary FTE option out of fear of losing their jobs. 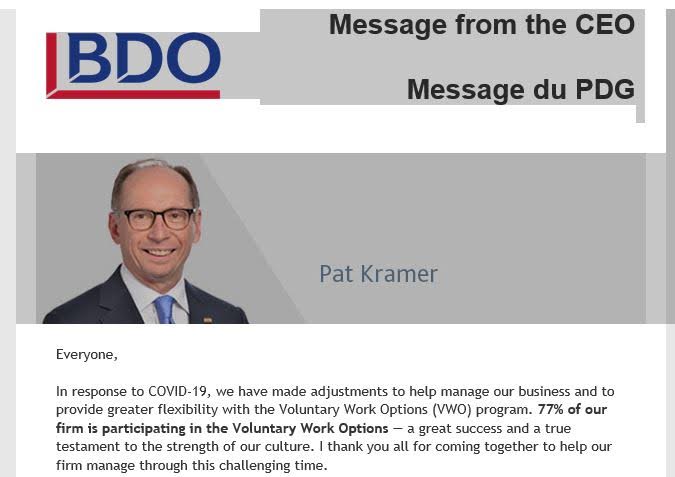 But as we know all too well, especially at Deloitte, EY, RSM, and now BDO in Canada, layoffs are still happening despite employees scaling back their billable hours and taking a cut in pay because they thought by doing this there wouldn’t be layoffs.

Our Vancouver source told us:

Even though people signed up, they started to lay off people behind the closed doors. Many people I know were laid off despite signing up 0.4~0.8 FTE.

At a recent firm-wide webinar someone asked Pat Kramer directly “why doesn’t BDO apply for the Canadian Wage Subsidiary program and he accidentally said  “Oh…because our revenue did not drop enough to qualify” before proceeding to announce that BDO is launching a FTE 2.0 program (“which was just launched half an hour ago, before the meeting actually,” he said happily). Now they are asking everyone to “voluntarily” reduce their hours further.

[UPDATE] On Friday morning we were told by another source that nine people have been let go from assurance and accounting in the Vancouver office since June 1.

According to our schedule there were 2 intermediates and a junior fired on Wednesday. On June 1 there were 3 seniors and 3 juniors let go after busy season. They told us that apparently the June 1 firings were performance based. So some of those might have been normal post-busy season cuts after roundtable review at the end of May.

This BDOer also confirmed that leadership was “very aggressive” with the FTE work reduction option.

All people leaders were told to contact their mentees and “ask” them to reduce their time. The FTE 2.0 hasn’t been quite as aggressive yet but we’ll see how hard they push this time.

And on Friday afternoon, we got a tip about another BDO Canada location other than Vancouver that has given out pink slips recently.

I am a former BDO employee and can attest that layoffs are also happening in Alberta offices despite the FTE reductions. They kept the layoffs very hush-hush and claimed they were “performance based” and “business decisions.” However, at least one of the layoffs came after a salaried employee expressed an inability/unwillingness to continue working unpaid overtime, while overtime for hourly employees (time the firm would actually have to pay employees for) was cut and FTE reductions were being pushed on staff.

If you have been impacted by the job cuts at BDO in Vancouver or if you know of any other BDO Canada offices that have started letting people go, get in touch with us by text or email using the contact info below.