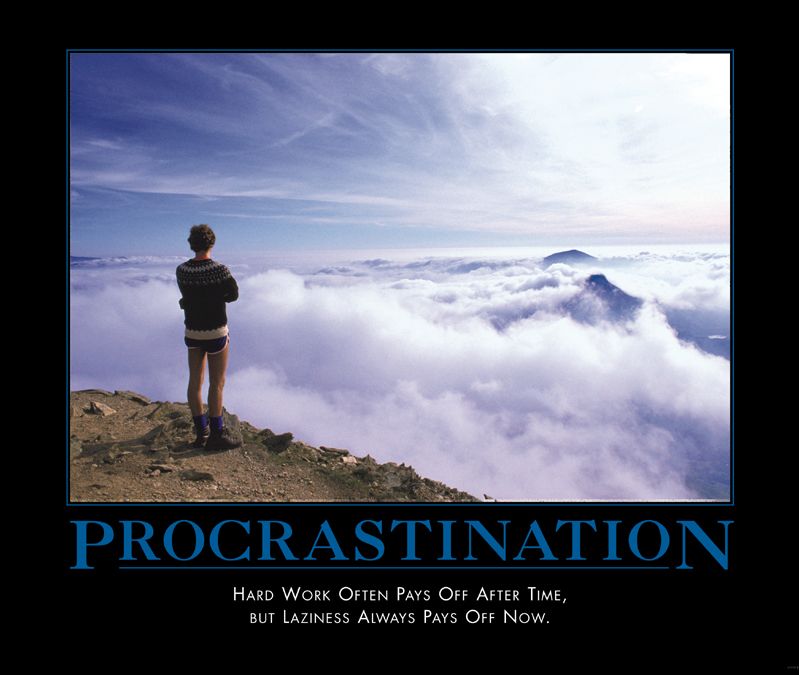 All humans procrastinate from time to time. Whether it's putting off washing the car or feeding the kids, we simply can't get to everything. I mean, who can?

As indentured servants to the capital markets, you are all too familiar with this dilemma. The to-do list grows long quite quickly and it's difficult to prioritize. Not a day goes by in public accounting where the following exchange takes place:

Accountant #1: "Dammit! I was so busy providing excellent client service that I didn't get to study for the CPA exam."

Even those with years of experience can let responsibilities slip/blow shit off. Take Nathan Suddeth as an example. Back in 2010-2011 he was the head of Deloitte's assurance practice in Pittsburgh. Being the partner-in-charge of a practice comes with a lot of responsibility, so between listening to auditors kvetch about their pay and recruiting every accountant with a pulse, things can get hectic. So hectic, in fact, that things like mandatory documentation for an audit can get forgotten. Luckily, Suddeth had his team backing him up:

Between the audit report release date [March 1, 2011] and the documentation completion date [April 15, 2011] for the Audit, Suddeth was reminded by the engagement team that the CFO Memorandum, GC Memorandum, and Independence Memorandum (collectively, the "Three Memoranda") were not in the work papers.

Right! Thanks, team! Except:

Just prior to the Audit engagement team submitting the Audit documentation to Deloitte's records management office to begin the process of archival and retention, Suddeth informed the Audit engagement team that he would not complete the Three Memoranda prior to commencement of the submission process. However, Suddeth caused a work paper index for the Audit to list the Three Memoranda as manual work papers (i.e., work papers in hard copy paper format, as opposed to electronic format).

Huh. Alright, then. As luck would have it, the Board informed Deloitte on May 23, 2011 that this audit would be inspected and that work would begin on June 13, 2011. The firm notified Suddeth of those facts the same day. GAH! If you thought this would by a mad scramble by Mr. Suddeth, you would be wrong:

HOT OFF THE PRESSES.
Of course, he didn't tell any of the inspectors about this which is a big no-no.
Anyway, this was brought to the firm's attention (the order does not say how) and they started an internal investigation in July 2012, relieved Suddeth of his duties as audit PIC in August 2012, and gave the scoop to the PCAOB. Fast-forward to 2013 and Suddeth retired on June 1, 2013 and today we get the PCAOB's order (in full on the next page) barring him from being an associated person with a registered firm.
No more PCAOB audits and a shorter to-do list? Actually, that doesn't sound like punishment at all, does it?

Remember those Bud Light Real American Heroes/Real Men of Genius TV and radio ads that were popular 20 years ago? You know, the ones that featured Survivor lead singer Dave Bickler and saluted such folks as “Mr. Giant Foam Finger Maker,” “Mr. Footlong Hot Dog Inventor,” and “Mr. Male Football Cheerleader”? My favorite one was […]