Whenever big CPA exam changes hit, some folks rush and try to get it done before the changes take effect. We saw this in 2010 with the pending implementation of CBT-e, a revamped “version” of the CPA exam that served little-to-no purpose other than getting CPA exam candidates worked up like a pack of untrained dogs over a raw steak. OK I’m being dramatic, CBT-e was a pretty significant overhaul of the exam and candidates were well within their God-given right to freak out a little bit about it.

This year’s CPA exam PITA was of course a suite of changes to the Regulation section of the exam. Once again, everyone freaked out like the sky was falling and didn’t know if they should get REG over with before the changes or put it off until some point in the future.

Well, as it turns out, y’all did a damn good job on REG in the first quarter. Changes be damned, candidates tore that shit up. Let’s take a look at the data from the AICPA.

On its own, those numbers don’t necessarily look that good, sure. But let’s compare to 2018, shall we? We took these numbers from I Pass the CPA Exam because for some reason the AICPA no longer has historical pass-rate data on its website. Wack. 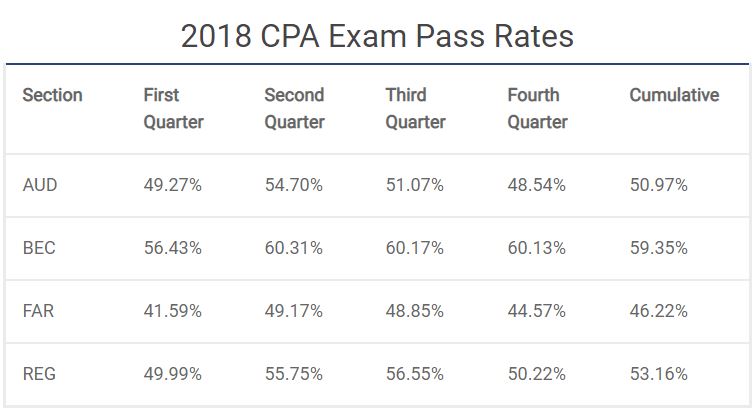 As you can see, candidates slightly outperformed last year’s REG pass rate for the same quarter, edging up over 50%. This is an even higher improvement when compared to 2017’s Q1 REG pass rate of 46.10%. Want to know something really impressive? This is the best candidates have performed on REG in the first quarter since 2006!

Obviously it’s early in the year and final pass rates for 2019 could end up being a hot pile of garbage, but for now, the first quarter pass rate for REG is hopeful. If you’ve been putting it off because you’re terrified of the changes, maybe this will fill you with tentative optimism.

To those of you who contributed to this spectacular performance, congrats. Let’s keep this going and fill the world with bright-eyed, brilliant little CPAs. Or something like that.

According to the AICPA’s CPA exam score release timeline, candidates who sat for the exam on or before July 23 were due to receive their scores tomorrow, August 7; however, according to a very recent tweet from NASBA, scores are here just a little early. #CPAExam candidates! Waiting for your score(s)? They will be released […]