Since the very beginning of the COVID-19 pandemic, we’ve heard and read complaints from CPA exam candidates that the benevolent overlords of CPA licensure have failed to properly communicate ever-changing procedures, plans, and timelines. Now, although candidates’ position on the matter is understandable, what with the CPA exam being one of the hardest things they’ll ever go through or at least the hardest thing they’ve experienced thus far in their lives, we think given the absolute clusterfuck that is Rona, some allowances should be made for the fact that a lot of this has been just those in power doing the best they can with no idea what might come next. You know how we’ve all sort of been riding this thing out by the seat of our comfy pants? So are they, except they don’t have the luxury of day-drinking (well, they probably do actually but let’s pretend not) because of all the future CPAs of America counting on them to figure things out.

With all that in mind, I came across this post from the California Board of Accountancy on Facebook the other day, and while I can see California candidates being less than excited by the actual timeline, it’s nice to see an update of sorts nonetheless. Let’s check it out: 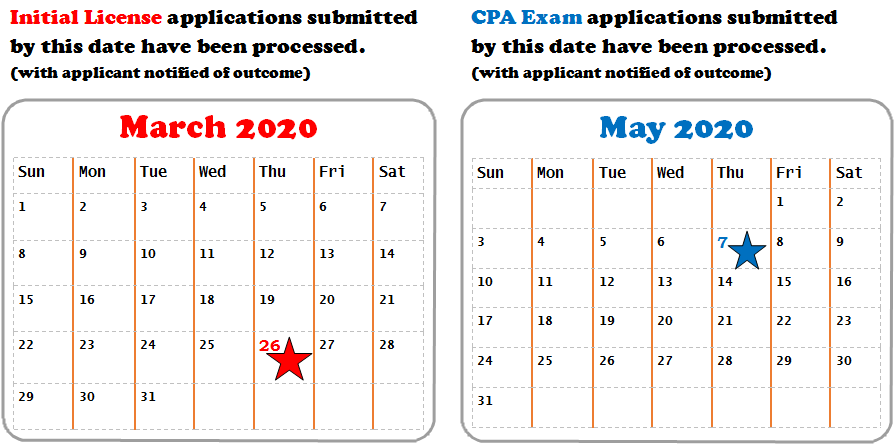 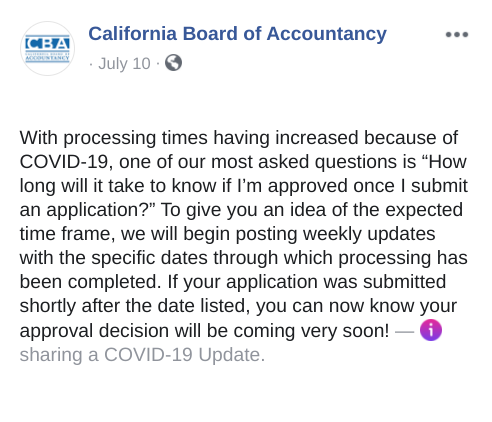 Bonus points to whoever made that calendar, I’m really feeling that 2004 softball team T-shirt font.

Other than the guy (?) who said “Worst state board, no accountability and neither they reply to mails,” the response to this attempt at transparency has been mostly warm, if a bit confused.

Damn tell us how you really feel, Bubu. The Board also clarified that for current (read: unprocessed) CPA exam and licensure applications, a two-to-three month delay in processing is expected at this time.

Look, it’s not great news. But it’s more than radio silence, which I know many candidates across other jurisdictions are experiencing right now. What’s worse, hearing bad news or hearing nothing at all? You know what, don’t answer that, have another drink and go take a nap. Sometimes that’s the best we all can do.