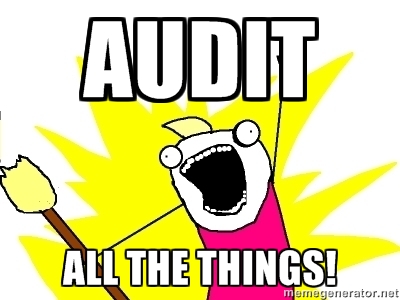 In an interview with the Journal of Accountancy, Deloitte & Touche CEO and jargon generator Joe Ucuzoglu suggested that stuff like press releases, presentations, non-GAAP metrics, anything that companies throw in front of investors to gawk at, really, could be fair game for auditors:

“Those metrics are becoming a bigger and bigger percentage of the mix of information that investors are relying upon,” Ucuzoglu said in a telephone interview. “So there is potentially an appetite for auditors to become involved in such a way that we can provide assurance that those numbers that are being relied upon by the markets and are moving stock prices have been, in fact, subject to some form of audit testing.”

On the one hand, it's strange that auditors would seek out more things to audit because LIABILITY frigthens them to death, but, since Joe U. has made it known that he has big plans for the auditing world, he sounds determined to raise the profile of auditors again:

“It’s going to be critically important for the profession to remain at the heart of attesting to the information that’s most important to the markets, and we must have an openness to gravitating our services into those areas,” Ucuzoglu said.

So, who out there wants to audit more things? What if the machines help?

Got a busy season problem? Don’t be shy. Email us at tips@goingconcern.com with “Busy Season Problems” in the subject line. Or you can text us at (202) 505-8885. It’s been exactly one month since tax season 2020 began. So let’s check in and see how busy season is treating our friends in tax so far: […]

Bringing up the rear among the Big 4 in the 2020 Fortune 100 Best Companies to Work For list is Deloitte, the largest public accounting firm in the U.S. in terms of number of employees and revenue. But while we’re talking about Deloitte and “largest,” the Green Dot had the largest drop in the ranking […]

Get the latest news for young professionals twice a week. No bull.

Honkamp Krueger Poaches Someone From PwC and Issues a Press Release, Part I