Yesterday, Colin stuck the following story in ANR. We're going to go ahead and give it its own spot because this is something worth discussing:

The number of New Yorkers obtaining their Certified Public Accounting license from the state remained relatively flat in 2014, according to statistics compiled by the New York State Education Department.

Back in December, AICPA President, CEO, and Chosen One Barry Melancon said in his "state of the profession" interview with CPA Letter Daily that the AICPA can't figure out why so many people are graduating with accounting degrees but fewer are sitting for the CPA exam, which would confirm the New York State numbers:

We have had about six consecutive years of record numbers of people majoring in accounting. That’s a great thing. For the last three years, however, we’ve basically had a level number of people taking the CPA exam. So there is a gap that’s building.

The gap is so confusing "a major research project" has started to "find out what’s causing people to sit or not sit for the exam and then design tactics to deal with it strategically." Which is code for: "throw money at the problem."

In the meantime, Xero's Jamie Sutherland wrote an article for us about someone who couldn't care less about becoming a CPA and doesn't necessarily need to based on the services he's providing to his clients. In explaining the growing CPA designation gap, he reminds us that even if fewer people are sitting for the CPA, overall brand recognition and respect is at an all-time high:

There is no question that the CPA designation is highly relevant and carries considerable cachet. After all, a CPA is who you turn to for taxes and a CPA is one of the most trustworthy designations on the planet. On top of that, the American public opinion of a the CPA brand is at an all time high as Barry alludes to in his blog.

Now we'll turn to the latest NASBA overview, which includes a broad snapshot of every candidate and every section taken in 2013: 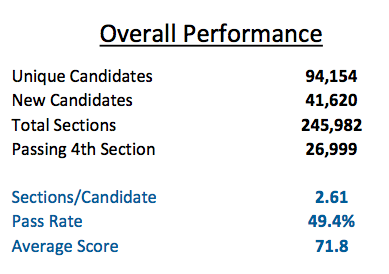 I'll go ahead and float a crazy idea here, but remember that time in 2010 when everyone was freaking out about the launch of CBT-e in 2011 and the subsequent CPA exam changes that would bring? And remember how that got people who might have otherwise dragged their feet all inspired to take as many exam parts as they could before the end of 2010? Remember how a lot of those people were terrified of IFRS — which, at the time, I said was stupid to put in the exam since we don't use it — and therefore lit a fire under their own asses to get the exam out of the way before that?

Barry, I think I just solved your confusion. You're talking about a "gap" of a few thousand people a year. You're still getting growth there. Certainly not the numbers we saw in 2010 but again, that's what happens when you scare the crap out of them with major CPA exam changes. Try doing that every year and see what happens to your candidate numbers. I'm willing to guess they fall right off the cliff but hey, what do I know?

The Journal of Accountancy reported this week that the NASBA Board of Directors voted unanimously to support the proposed CPA Evolution, which would mean a slightly different exam with a stronger focus on technical skills, though core content is expected to remain the same. The AICPA Governing Council endorsed the model in May. We first […]

It’s nothing rare for accounting students and aspiring CPAs alike to say “these exams are killing me,” but I’ve got to say this is the first time I’ve seen a legal document stating in no uncertain terms that the exam can in fact kill you. What a wild timeline we live in. Let’s check in […]